Pericles ( Περικλῆς) was an influential politician and general during the Golden Age of Athens. He lived from circa 495 to 429 BC, and his most powerful period was between the Greco-Persian Wars and the Peloponnesian War. The period 461-429 BC is known as the Age of Pericles. Along with several members of his family, Pericles died of the Plague of Athens in 429 BC.

Pericles is credited for turning the Delian League into an Athenian empire, promoting the arts and literature, and promoting Athenian democracy to such an extent that his critics called him a populist. Most of the surviving structures on the Acropolis were built on Pericles´s initiative, including the Parthenon. 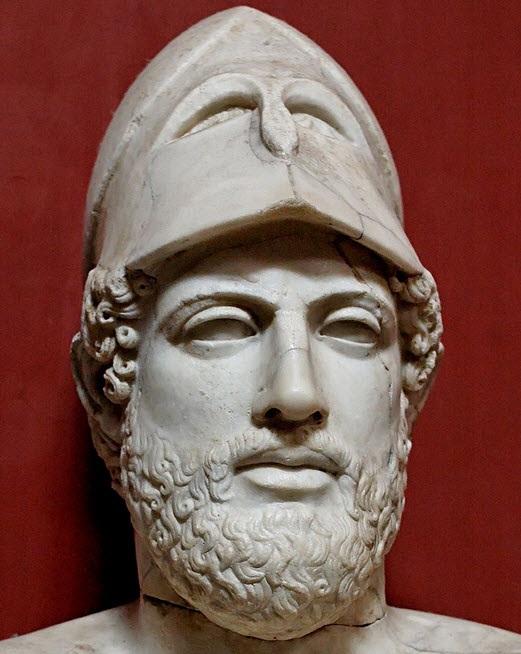 Pericles was born in Athens circa 495 BC, to the politician Xanthippus and his wife Agariste. Due to the deme reforms carried out in Athens under the leadership of Cleisthenes, Pericles belonged to the tribe Acamantis.

Agariste came from the powerful aristocratic clan Alcmaeonidae, and her connections played a crucial role in getting Xanthippus political career off the ground. Agariste was the niece of the reformer Cleisthenes, and the great-granddaughter of Cleisthenes forefather Cleisthenes of Sicyon.

Xanthippus was ostracised in 485-484 BC, but then returned to Athens. He commanded the Athenian continent in the Greek victory at Mycale.

Pericles has been described as an introverted child who avoided public appearances. He liked to study, and his family´s position permitted him to pursue this.

Pericles was a charismatic leader and an excellent orator. He enjoyed the company of the philosophers Protagoras, Zeno of Elea, and Anaxagoras, and the latter was an especially large influence on him. Some scholars have suggested that Pericles´s manner of thought, renowned calmness and great charisma was in part due to Anazagoras´s emphasis on emotional calm in the face of trouble.

Pericles is largely described favourable by ancient historians, who claimed that he kept himself untainted by corruption. Some, such as Thucydides, even went as far as openly admire him and his leadership. Plato has a more even-keeled view, and in one of his dialogues he rejects the glorification of Pericles and declares that “as I know, Pericles made the Athenians slothful, garrulous and avaricious, by starting the system of public fees”.

Ancient and modern criticism of Pericles typically centre on him being “too democratic”, i.e. a populist, who spoiled the Athenians. Plutarch writes that “many others say that the people were first led on by him into allotments of public lands, festival-grants, and distributions of fees for public services, thereby falling into bad habits, and becoming luxurious and wanton under the influence of his public measures, instead of frugal and self-sufficing”.

As a strategos, Pericles led military expeditions for over 20 years, including many naval ones as he agreed with Themistcocles´s principle that Athen´s domination was due to its superior naval power. Pericles was a cautious decision-maker who would stand up against populist demands for action. At home, Pericles had the walls of Athens rebuilt to make the city-state better equipped at resisting Sparta.

During the Peloponnesian War, Pericles adopted a defensive strategy where the aim was to exchaust the enemy and preserve the status quo rather than winning more land. The strategy stood on two pillars: reject appeasement (e.g. do not revoke the Megarian Decree) and avoid overexertion. For his ability to convince the Athenians to stick to this “boring” and unpopular strategy, historian Hans Delbrück has called him one of the greatest statesmen and military leaders in history.

Even after his death in 429 BC, the Athenians largely continued to follow the Periclean strategy until the Sicilian Expedition of 415–413 BC.

The historian Thucydides is a main source of information about Pericles speeches, but it is difficult to know with any certainty how much of the cited speeches that represent Pericles´s own words and how much that was invented or paraphrased by Thucydides, who recreated three speeches from memory. As far as we know, Pericles himself did not write down or distribute his speeches. Worth mentioning is that the passionate and idealistic literary style of Pericles speeches as relayed to us through Thucydides are very different from Thucydides´s own cold and analytical style.

According to Diodorus Siculus, Pericles “excelled all his fellow citizens in skill of oratory”, and Kagan claims that Perciles used an elevated mode of speech that was free from the tricks employed by mob-orators. Plutarch agrees, pointing out that Pericles avoided the use of gimmicks in his speeches and always spoke in a calm manner.

In accordance with Athenian custom, Pericles married to one of his close relatives. Her name is unknown, we only know that she was the wife of Hipponicus before her marriage to Pericles. With Hipponicus, she had the son Callias who would later feature in Athenian political life. With Pericles, she had the sons Paralus and Xanthippus. Around 445 BC, Pericles divorced his wife and offered her to another husband, with the approval of her male relatives.

After his divorce, Pericles had a long-term relationship with Aspasia of Miletus, but did not marry her. Together, they had the son Pericles (known to historians as Pericles the Younger). Aspasia of Miletus was not an Athenian citizen, and Pericles was criticised for his choice in romantic partner. Due to the law of 451 BC, his son with Aspasia was not an Athenian citizen since his mother did not fulfil the requirements. It was Pericles himself that had proposed the law which confined citizenship to those who had the right parentage on both sides.

Both of Pericles´s legitimate sons, and their mother, died in the same plague that kill Pericles himself in 429 BC. Just before the death of Pericles, the Athenians permitted a special exception to the law of 451 BC to make Aspasia´s son with Pericles a citizen and legitimate heir to Pericles.

Comments Off on Pericles