Cleisthenes ( Κλεισθένης), also known as Clisthenes, was an Athenian lawgiver in ancient Greece. He is credit with reforming the constitution of ancient Athens in 508 B.C. to promote democracy, and is therefore known as the father of Athenian democracy.

Cleisthenes broke up the old political system based on with bloodline aristocracy and instead created a system based on residence location. He also carried out several other notable governmental and voting reforms in order to bring more people into the power system while simultaneously decreasing the risk of anyone setting themselves up to be a tyrant. 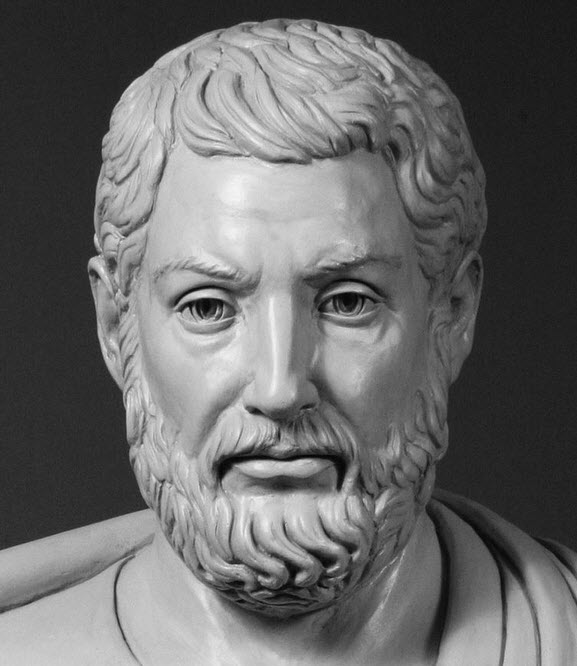 Historians estimate the birth of Cleisthenes to around 570 BC.

He was born into the clan Alcmaeonidae, a wealthy and powerful aristocratic clan who claimed descent from the mythological Alcmaeo, the great-grandson of the legendary wise King Nestor who is featured in Homer´s Odyssey.

Cleisthenes was the younger son of Megacles and Agariste, and thus the maternal grandson of the Cleisthenes who ruled Sicyon as a tyrant.

Pisistratus or Peisistratus ruled ancient Athens during most of the period between 561 and 527 BC. When he came to power, he exiled families he felt was a threat to his power, including the Alcmeonidaes.

Cleisthenes returns to Athens and gets help from the Spartans

After the death of Pisistratus in 527 BC, Cleisthenes could return to Athens, but after just a few years, he was exiled again, this time by Pisistratus successors Hipparchus and Hippias. In 514 BC, Hipparchus was assassinated, and his eldest son Hippias reacted by being even stricter in his dealings with his subjects. The worsening situation for the residents of Athens caused Cleisthenes to ask the Oracle of Delphi help persuade the Spartans to assist the Athenian population in their struggle against Hippias. The Oracle of Delphi had a favourable view of the Alcmeonidaes family, as they had previously helped rebuild the Oracle´s sanctuary after a fire.

The Oracle agreed to help, and in 510 BC Hippias was overthrown with the help of Spartan troops. The Spartan king Cleomenes I put a pro-Spartan oligarchy in charge of Athens, headed by the Athenian aristocrat Isagoras.

Cleisthenes was once again expelled from Athens, as he was now a rival to Isagoras.

When Cleisthenes was exiled, it was under the pretext of him (and his family) being cursed. Once he had left, Isagoras made himself unpopular by dispossessing and exiling hundreds of other Athenians using the same accusation against them.

When Isagoras attempted to dissolve the Boule – a council of Athenian citizens who ran the daily affairs of the city – the Athenians openly declared their support of the Boule and went against their ruler. Isagoras and his supporters fled to Acropolis, and then away from Athens.

Once Isagoras had been banished from Athens, Cleisthenes and the other exiles were recalled, and Cleisthenes assumed leadership of Athens, with the support of the Athenian middle class and democratic elements. Cleomenes I intervened against Cleisthenes in 508 and 506 BC, but the Athenians were strong in their support for Cleisthenes.

One of Cleisthenes first acts as ruler was to commission a bronze memorial in honor of the two men who had murdered Hipparchus and been executed by Hippias.

The rule of Cleisthenes

Cleisthenes reformed the government of Athens in various ways.

When he came into power, Athens was marked by conflicts between four dominating and powerful tribes (aristocratic families). Cleisthenes instead divided the citizens into ten tribes based on their area of residence (their “deme”) to form the foundation of a new power structure. Historians debate how many demes there were, but probably around 140. The deme system was then sub-organized in particular ways to create a type of balance and also split up and weaken the aristocracy.

Cleisthenes abolished patronymics in favour of demonymics, which meant removing family (bloodline) names in favour of names signifying your deme.

One of the results of Cleisthenes deme reforms was that wealthy, male citizens were now included in the ruling system even of they were foreigners.

Cleisthenes introduced the sortition system, where citizens were randomly selected to fill government positions. This abolished the old system where such positions were largely a question of heredity or kinship.

Reorganization of the Boule

The above-mentioned Boule was reorganized. Instead of having 400 members, it now got 500 members – 50 from each of the ten (newly established) tribes. Members of the Boule had to swear an oath to “advise according to the laws what was best for the people”.

Under Cleisthenes, the Boule proposed laws to the assembly of voters who convened in Athens around 40 times a year to vote on proposals. A proposal could be passed, rejected or returned for amendments.

The court system Dikasteria was reorganized. After the reorganization, it had from 201 to 5001 jurors selected each day, with a maximum of 500 from each tribe.

Some historians credit Cleisthenes with introducing the ostracism system, at some point around 506 BC. The first known practice of ostracism did not happen until 487 BC, when Hipparcos son of Charmos, a relative of Peisistratos, was ostracized. Over the next 60 years, another 12 individuals are known to have been ostracized.

The ostracized man did not loose his property, but he was not allowed to be physically present in Athens.

Comments Off on Cleisthenes