Kritarchy, also known as kritocracy, was the system of rule by Biblical judges (Hebrew: שופטים, shoftim) in ancient Israel. According to the Book of Exodus, it was established by Moses.

Nowadays, the term is not only used for the ancient Israeli rule – the meaning has expanded to denote rule by judges in a more general sense, and even when the judges are not religious judges.

According to the Book of Exodus, Moses established a system of kritarchy in ancient Israel.

Israeli tribes are believed to have formed some type of loose confederation from the conquest of Caanan by Joshua, and this confederation lasted until the creation of the First Kingdom of Israel and Judah in circa 1150-1025 BCE. There is no evidence of any central government existing during the time of the confederation, but when there was a crisis the people would be led by ad hoc chieftains known as shoftim or shofetim, which is the Hebrew word for judges (singular: shofet). 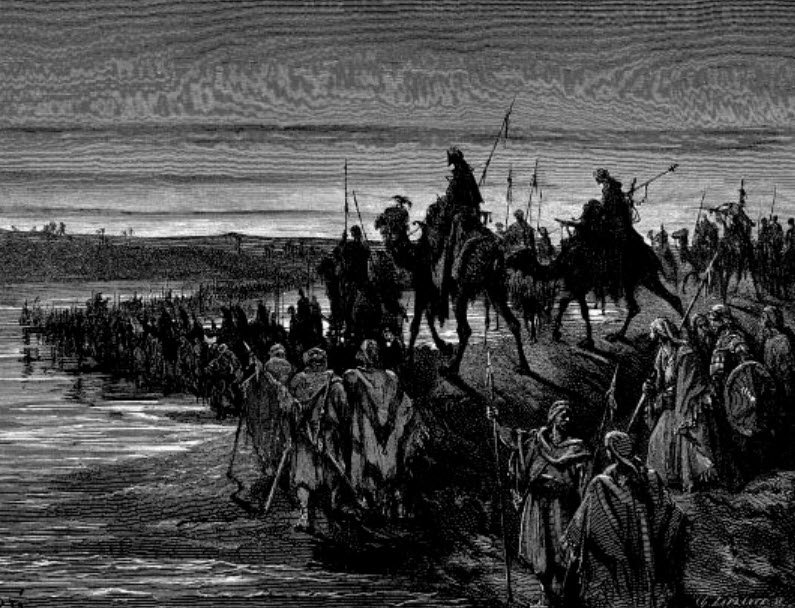 Judges in the Hebrew Bible

In the Hebrew Bible, Moses is described as a shofet over the Israelites, and we also learn that he appoints other judges to delegate cases to, in adherence with the advice of Mose´s father-in-law Jethro.

The Book of Judges mentions twelve leaders who judge Israel: Othniel, Ehud, Shamgar, Deborah, Gideon, Tola, Jair, Jephthah, Ibzan, Elon, Abdon, and Samson. It also contains the story of Abimelech, who is appointed as a judge-like leader by the citizens of the city Shechem, but it is unclear if he was actually a judge.

The Islamic Courts Union (ICU) was a legal and political organisation established in 1994 to address the lawlessness in Somalia following the fall of the Siad Barre regime in 1991, during the Somali Civil War. The Somali name of the organisation is Midowga Maxkamadaha Islaamiga.

The stabilizing influence of ICU in Somalia was boosted by wealthy donors who wanted to see increased stability in the area.

History of the ICU

The ICU was formed in the north of Mogadishu in 1994, and then spread to the south in the capital. By 1996, it encompassed both the northern and the souther part of the capital.

When the transitional government of Abdiqasim Hassan Salda came to power in 2000, the momentum of the ICU slowed down, but it was revived again in 2004 by returning emigré Sharif Sheikh Ahmed who had a BA in Law and Islamic Shariah. He had established the Al Shuruuq Agency and the Federation of Adolescents in Mogadishu, been a regional attorney of his home province Middle Shabelle, and served as chairman of a provincial court in Jowhar in 2001-2002.

Notably, Sharif led a successful campaign to secure an release a kidnapped child, alongside several other abductees and stolen property. (At the time, armed groups in Mogadishu were taking advantage of the lawlessness to turn kidnappings for ransom into an industry.) He established himeself as the moderate face of the ICU and earned a lot of support.

After a period of successful supression of gang violence in Mogadishu, five Islamic Courts united under Sharif. Step-by-step, warlords and their influence were removed from the city. By July 2006, it was even possible to reopen the Mogadishu International Airport.

The ARPCT and foreign involvement against the ICU

In June and July 2006, an alliance of warlords and small businessmen tried to seize control of Mogadishu and launched an offensive against the ICU. Naming itself The Alliance for the Restoration of Peace and Counter-Terrorism (ARPCT), it included some of the ministers from the TFG.

The ARPCT recieved funding from the United States. According to a statment by the International Crisis Croup in June 2006, the CIA was funnelling $100,000 to $150,000 a month to ARPCT. Michael Zorick, the U.S. State Department’s political officer for Somalia (but stationed in Nairobi), critized Washington’s policy of paying Somali warlords, and was subsequently reassigned to Chad.

The ARPCT was involved in the 2006 Battle of Mogadishu, but then lost traction as the ICU expanded further in Somalia the warlord´s respective territories fell under ICU control.

The 2006 success of the ICU was to be shortlived, however, partly due to Ethiopian intervention. When the Transitional Federal Government (TFG), an internationally recognized provisional government of the Somalia, was established in 2004, it was a fragile body fraught by internal divisions. The Ethiopian army eventually invaded Somalia claiming they were trying to help the TGF. The armed conflict that followed involved both Ethiopian forces, TGF forces and troops fromt the Puntland State of Somalia who all opposed the ICU and the militias affiliated with them.

On December 26, 2006, the ICU withdrew from Mogadishu. The following day, the top leaders of ICU (including Sheikh Hassan Dahir Aweys, Sheikh Sharif Sheikh Ahmed and Sheikh Abdirahman Janaqow) resigned and the organisation was disbanded.

Comments Off on Kritarchy